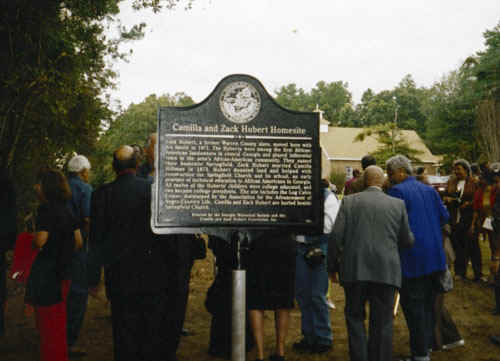 Marker Text: Zack Hubert, a former Warren County slave, moved here with his family in 1871. The Huberts were among the first African-American landowners in central Georgia and played influential roles in the area’s African-American community. They named their homesite Springfield. Zack Hubert married Camilla Hillman in 1873. Hubert donated land and helped with construction for Springfield Church and its school, an early provider of technical education to African Americans in Georgia. All twelve of the Huberts’ children were college educated, and two became college presidents. The site includes the Log Cabin Center, maintained by the Association for the Advancement of Negro Country Life. Camilla and Zack Hubert are buried beside Springfield Church.