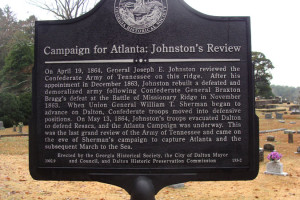 Marker Text: On April 19, 1864, General Joseph E. Johnston reviewed the Confederate Army of Tennessee on this ridge. After his appointment in December 1863, Johnston rebuilt a defeated and demoralized army following Confederate General Braxton Bragg’s defeat at the Battle of Missionary Ridge in November 1863. When Union General William T. Sherman began to advance on Dalton, Confederate troops moved into defensive positions. On May 13, 1864, Johnston’s troops evacuated Dalton to defend Resaca, and the Atlanta Campaign was underway. This was the last grand review of the Army of Tennessee and came on the eve of Sherman’s campaign to capture Atlanta and the subsequent March to the Sea.

Erected by the Georgia Historical Society, the City of Dalton Mayor and Council, and Dalton Historic Preservation Commission.

Tips for Finding This Marker: At the intersection of Ridge and Cuyler Streets in Dalton