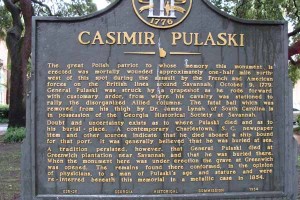 Marker Text: The great Polish patriot to whose memory this monument is erected was mortally wounded approximately one-half mile northwest of this spot during the assault by the French and American forces on the British lines around Savannah, October 9, 1779. General Pulaski was struck by a grapeshot as he rode forward with customary ardor, from where his cavalry was stationed to rally the disorganized Allied columns. The fatal ball which was removed from his thigh by Dr. James Lynah of South Carolina is in possession of the Georgia Historical Society at Savannah.

Doubt and uncertainty exists as to where Pulaski died and as to his burial-place. A contemporary Charleston, S.C. newspaper item and other sources indicate that he died aboard a ship bound for that port. It was generally believed that he was buried at sea. A tradition persisted, however, that General Pulaski died at Greenwich plantation near Savannah and that he was buried there. When the monument here was under erection the grave at Greenwich was opened. The remains found there conformed, in the opinion of physicians, to a man of Pulaski’s age and stature and were re-interred beneath this memorial in a metallic case in 1854.

Tips for Finding This Marker: On Monterey Square, at the intersection of Bull and Wayne Streets in Savannah.