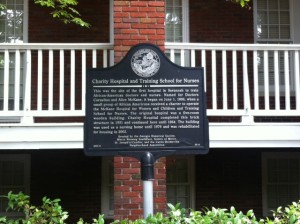 Marker Text: This was the site of the first hospital in Savannah to train African-American doctors and nurses. Named for Doctors Cornelius and Alice McKane, it began on June 1, 1896, when a small group of African Americans received a charter to operate the McKane Hospital for Women and Children and Training School for Nurses. The original hospital was a five-room wooden building. Charity Hospital completed this brick structure in 1931 and continued here until 1964. The building was used as a nursing home until 1976 and was rehabilitated for housing in 2002.

Tips for Finding This Marker: At 644 West 36th Street in Savannah
To learn more about this marker topic, visit our Hidden Histories online exhibit.