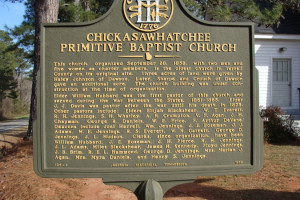 Marker Text: This church, organized September 28, 1858, with two men and five women as charter members, is the oldest church in Terrell County on its original site. Three acres of land were given by Haley Johnson of Dawson. Later, Sharpe and Crouch of Dawson gave an additional acre. The church building was under construction at the time of organization.

Tips for Finding This Marker: On GA 32, west of Edgewood Road in Dawson.