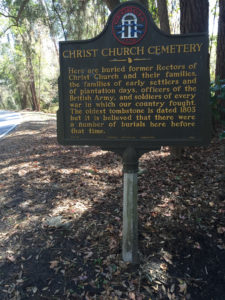 Marker Text: Here are buried former Rectors of Christ Church and their families, the families of early settlers and of plantation days, officers of the British Army, and soldiers of every war in which our country fought. The oldest tombstone is dated 1803 but it is believed that there were a number of burials here before that time.