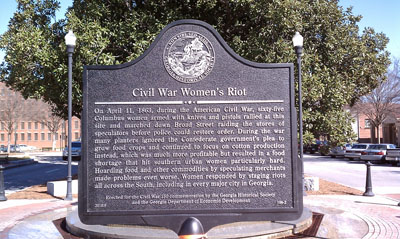 Marker Text: On April 11, 1863, during the American Civil War, sixty-five Columbus women armed with knives and pistols rallied at this site and marched down Broad Street raiding the stores of speculators before police could restore order. During the war many planters ignored the Confederate government’s plea to grow food crops and continued to focus on cotton production instead, which was much more profitable but resulted in a food shortage that hit southern urban women particularly hard. Hoarding food and other commodities by speculating merchants made problems even worse. Women responded by staging riots all across the South, including in every major city in Georgia.

Erected for the Civil War 150 commemoration by the Georgia Historical Society and the Georgia Department of Economic Development in 2010.

Tips for Finding This Marker: On Broadway, between 13th and 14th Streets in Columbus