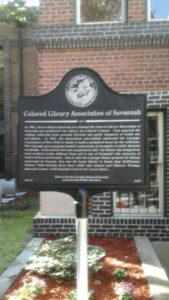 Marker Text: In 1906, eleven African-American men formed the Colored Library Association of Savannah and established the Library for Colored Citizens. They acquired the original collection from personal libraries and public donations of books and periodicals. In 1913, the Association successfully petitioned the Carnegie Corporation of New York for funds to build a permanent home for the collection. The Carnegie grant program funded construction of thousands of public libraries worldwide. Dedicated in 1914 and completed in 1915, the library was designed by local architect Julian deBruyn Kops and is one of Savannah’s few examples of Prairie School architecture. One of only two Carnegie library projects for African Americans in Georgia, this was the home library to James Alan McPherson, Pulitzer Prize–winning short story writer and essayist and Clarence Thomas, Associate Justice of the Supreme Court of the United States.

Tips for Finding This Marker: At the front of the library to the left of the stairs