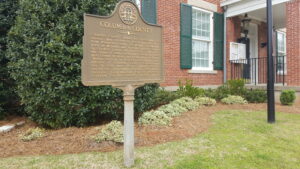 Tips for Finding This Marker: On Appling Harlem Road in Appling.