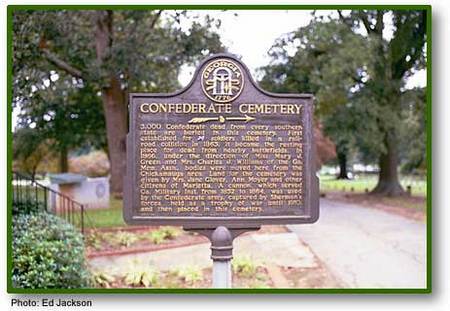 Marker Text: 3,000 Confederate dead from every southern state are buried in this cemetery. First established for [CS] soldiers killed in a railroad collision in 1863, it became the resting place for dead from nearby battlefields. In 1866, under the direction of Miss Mary J. Green and Mrs. Charles J. Williams of the Ga. mem. Assn., bodies were moved here from the Chickamauga area. Land for the cemetery was given by Mrs. Jane Glover, Ann Moyer and other citizens of Marietta. A cannon, which served Ga. Military Inst. from 1852 to 1864, was used by the Confederate army, captured by Sherman’s forces, held as a trophy of war until 1910, and then placed in this cemetery.

Tips for Finding This Marker: In the old Marietta/Confederate Cemetery in Marietta.