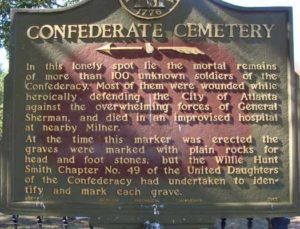 Marker Text: In this lonely spot lie the mortal remains of more than 100 unknown soldiers of the Confederacy. Most of them were wounded while heroically defending the City of Atlanta against the overwhelming forces of General Sherman and died in an improvised hospital at nearby Milner.

At the time this marker was erected, the graves were marked with plain rocks for head and foot stones, but the Willie Hunt Smith Chapter No. 49 of the United Daughters of the Confederacy had undertaken the honor to identify and mark each grave.

Tips for Finding This Marker: On Lawrence Road, south of Liberty Hill Road in Milner