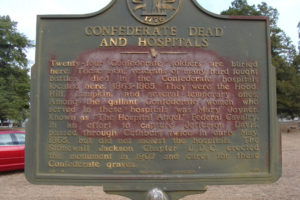 Marker Text: Twenty-four Confederate soldiers are buried here. These men, veterans of many hard fought battles, died in the Confederate hospitals located here, 1863-1865. They were the Hood, Hill, Lumpkin, and several temporary ones. Among the gallant Confederate women who served in those hospitals was Mary Joyner, known as “The Hospital Angel”. Federal Cavalry, in an effort to capture Jefferson Davis, passed through Cuthbert twice in early May, 1865, but did not molest the hospitals. The Stonewall Jackson Chapter U.D.C. erected the monument in 1907 and cares for these Confederate graves.

Tips for Finding This Marker: In Greenwood Cemetery, on Hamilton Avenue in Cuthbert.