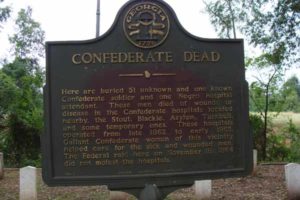 Marker Text: Here are buried 51 unknown and one known Confederate soldier and one Negro hospital attendant. These men died of wounds or disease in the Confederate hospitals located nearby, the Stout, Blackie, Asylum, Turnbull, and some temporary ones. These hospitals operated from late 1862 to early 1865. Gallant Confederate women of this vicinity helped care for the sick and wounded men. The Federal raid here on November 18, 1864 did not molest the hospitals.

Tips for Finding This Marker: In Madison Cemetery, on West Central Avenue in Madison