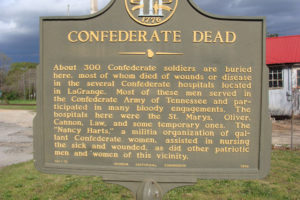 Marker Text: About 300 Confederate soldiers are buried here, most of whom died of wounds or disease in the several Confederate hospitals located in LaGrange. Most of these men served in the Confederate Army of Tennessee and participated in many bloody engagements. The hospitals here were the St. Marys, Oliver, Cannon, Law, and some temporary ones. The “Nancy Harts,” a militia organization of gallant Confederate women, assisted in nursing the sick and wounded, as did other patriotic men and women of this vicinity.

Tips for Finding This Marker: On Miller Street, east of Douglas Street in LaGrange.