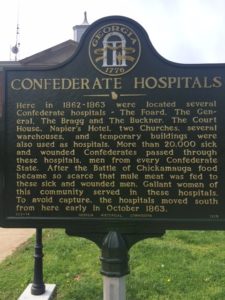 Marker Text: Here in 1862-1863 were located several Confederate hospitals – The Foard, The General, The Bragg, and The Buckner. The Court House, Napier’s Hotel, two Churches, several warehouses, and temporary buildings were also used as hospitals. More than 20,000 sick and wounded Confederates passed through these hospitals, men from every Confederate State. After the Battle of Chickamauga, food became so scarce that mule meat was fed to these sick and wounded men. Gallant women of this community served in these hospitals. To avoid capture, the hospitals moved south from here early in October 1863.

Tips for Finding This Marker: At the courthouse in Ringgold.