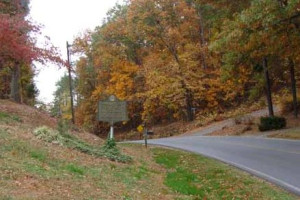 Marker Text: The three corps of Gen. Joseph E. Johnston’s Army [CSA] were withdrawn from N. & W. of Cassville to this ridge, E. & S. of the town.

Hardee was posted astride the R.R. near Cass Station on the S. Polk centered here & Hood’s line skirted the cemetery N.

This shift from an aggressive to a defensive position resulted in a Council of War at Polk’s h’dq’rs, where it was claimed the line was untenable, whereupon Johnston ordered a retreat to to the Etowah River that night.

Tips for Finding This Marker: On Mac Johnson Road, northeast of US 41 in Cartersville.