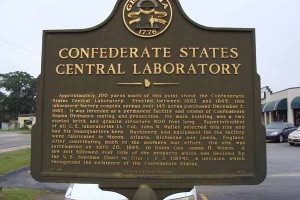 Marker Text: Approximately 100 yards south of this point stood the Confederate States Central Laboratory. Erected between 1862 and 1865, this laboratory-factory complex spread over 145 acres purchased December 2, 1862. It was intended as a permanent facility and center of Confederate States Ordinance testing and production. Its main building was a two storied brick and granite structure 600 feet long. Superintendent of all C.S. laboratories Lt. Col. John W. Mallet selected this site and had his headquarters here. Machinery and equipment for the facility were fabricated in Macon, Atlanta, Richmond and Leeds, England. After contributing much to the southern war effort, the site was surrendered on April 20, 1865, to Union Gen. James H. Wilson. A law suit followed over title of the property which was decided by the U.S. Supreme Court in Titus v. U.S. (1874), a decision which recognized the existence of the Confederate States.

Tips for Finding This Marker: At the intersection of US 41 and Vista Circle in Macon.