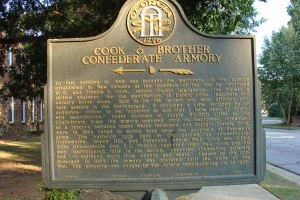 Marker Text: To this building in 1862 was brought the machinery of the armory established in New Orleans at the outbreak of the War by Ferdinand W.C. and Francis L. Cook, recent English immigrants, the former a skilled engineer, for the manufacture of Enfield rifles, bayonets and cavalry horse shoes. Said to be the largest and most efficient private armory in the Confederacy, it produced a rifle declared by an ordnance officer to be “superior to any that I have seen of Southern manufacture.” Under contract to supply 30,000 rifles to the Confederate Army the armory operated until its employees, organized as a reserve battalion under Major Ferdinand and Captain Francis Cook, were in 1864 called to active duty upon the approach of Sherman’s army. The battalion took part in the battles of Griswoldville, Grahamville, Honey Hill and Savannah where Major. Cook was killed.

After Griswoldville Gen. P.J. Phillips reported that Maj. Cook and his men “participated fully in the action, deported themselves gallantly and . . . . suffered much from wounds and death.” Leased by the Confederacy in 1865 the armory was operated until the close of the War. The property was bought by the Athens Manufacturing Co. in 1870.