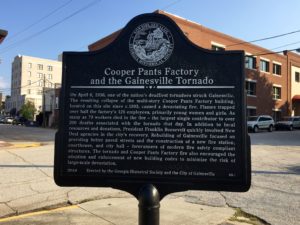 Marker Text: On April 6, 1936, one of the nation’s deadliest tornadoes struck Gainesville.  The resulting collapse of the multi-story Cooper Pants Factory building, located on this site since c.1893, caused a devastating fire.  Flames trapped over half the factory’s 125 employees, primarily young women and girls. As many as 70 workers died in the fire – the largest single contributor to over 200 deaths associated with the tornado that day. In addition to local resources and donations, President Franklin Roosevelt quickly involved New Deal agencies in the city’s recovery.  Rebuilding of Gainesville focused on providing better paved streets and the construction of a new fire station, courthouse and city hall – forerunners of modern fire safety compliant structures. The tornado and Cooper Pants Factory fire also encouraged the adoption and enforcement of new building codes to minimize the risk of large-scale devastation.

Erected by the Georgia Historical Society and the City of Gainesville

Tips for Finding This Marker: At the corner of Maple and Broad Streets