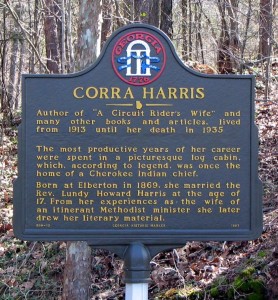 Marker Text:  Author of “A Circuit Rider´s Wife” and many other books and articles, lived from 1913 until her death in 1935.
The most productive years of her career were spent in a picturesque log cabin, which, according to legend, was once the home of a Cherokee Indian chief.
Born at Elberton in 1869, she married the Rev. Lundy Howard Harris at the age of 17. From her experiences as the wife of an itinerant Methodist minister she later drew her literary material.

Tips for Finding This Marker: On Mount Pleasant Road 1.7 miles from Georgia Route 140, on the right when traveling north near Pine Log.