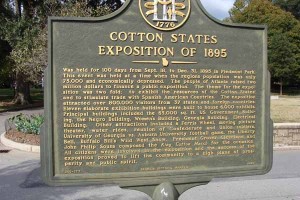 Marker Text: Was held for 100 days from Sept. 18. to Dec 31, 1895 in Piedmont Park. This event was held at a time when the region’s population was only 75,000 and economically depressed. The people of Atlanta raised two million dollars to finance a public exposition. The theme for the exposition was two fold: to exhibit the resources of the Cotton States and to stimulate trade with Spanish American Countries. The exposition attracted over 800,000 visitors from 37 states and foreign countries. Eleven elaborate exhibition buildings were built to house 6,000 exhibits. Principal buildings included the 65,000 sq. ft. US Government Building, the Negro Building, Women’s Building, Georgia Building, Electrical Building. Other attractions included a Ferris Wheel moving picture theater, water rides, reunion of Confederate and Union soldiers, University of Georgia vs. Auburn University football game, the Liberty Bell, Buffalo Bill’s Wild West Show. President Grover Cleveland and John Philip Sousa composed the King Cotton March for the occasion. All citizens were involved in the exposition and the success of the exposition proved to lift the community to a high plane of prosperity and public spirit.

Tips for Finding This Marker: In Piedmont Park, near 14th Street in Atlanta