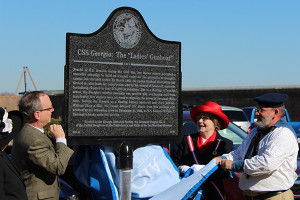 Marker Text: Fearful of U.S. invasion during the Civil War, two Macon women prompted a statewide campaign to build an ironclad vessel for the protection of Georgia’s coastal and riverside towns. By March 1862, the Ladies Gunboat Association had formed to raise funds for construction. Led by the women of Savannah, statewide fundraising resulted in over $115,000 in donations. Due to a shortage of iron for armor, the Georgia’s wooden casemate was covered with overlapping rails from train tracks. Her engines were too weak to negotiate the powerful Savannah River tides, leaving the Georgia as a floating battery anchored near Fort Jackson. Without firing a shot, the vessel deterred U.S. attack from this position until scuttled by her retreating crew on December 20, 1864, as U.S. General William T. Sherman’s forces encircled the city.

Erected by the Georgia Historical Society, the Savannah Chapter No. 2 of the United Daughters of the Confederacy, and Ships of the Sea Maritime Museum

Tips for Finding This Marker: To the right of the parking lot at Old Fort Jackson
To learn more about this marker topic, visit our Hidden Histories online exhibit.