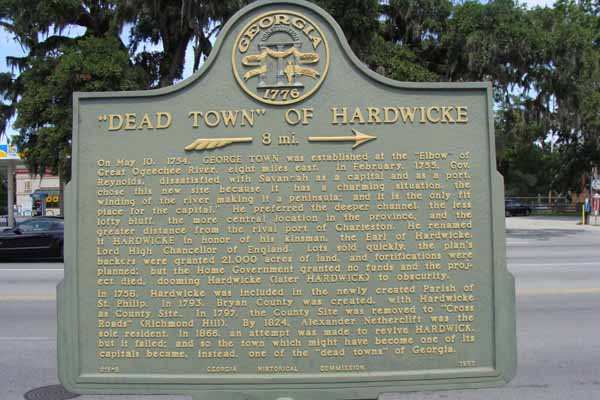 *Marker Text: On May 10, 1754, GEORGE TOWN was established at the “Elbow” of Great Ogeechee River, eight miles east. In February, 1755, Gov. Reynolds, dissatisfied with Savannah as a capital and as a port, chose this new site because it has a charming situation, the winding of the river making it a peninsula; and it is the only fit place for a capital.” He preferred the deeper channel, the less lofty bluff, the more central location in the province, and the greater distance from the rival port of Charleston. He renamed it HARDWICKE in honor of his kinsman, the Earl of Hardwicke, Lord High Chancellor of England. Lots sold quickly, the plan´s backers were granted 21,000 acres of land, and fortifications were planned; but the Home Government granted no funds and the project died, dooming Hardwicke (later HARDWICK) to obscurity.

In 1758, Hardwicke was included in the newly created Parish of St. Phillip. In 1793, Bryan County was created, with Hardwicke as County Site. In 1797, the County Site was removed to “Cross Roads” (Richmond Hill). By 1824, Alexander Netherclift was the sole resident. In 1866, an attempt was made to revive HARDWICK, but it failed; and so the town which might have become one of its capitals became, instead, one of the “dead towns” of Georgia.

Tips for Finding This Marker: At the intersection of GA 25 and GA 144 in Richmond Hill.