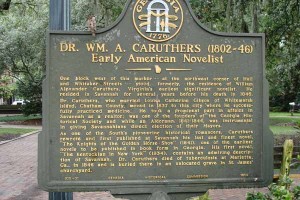 Marker Text: One block west of this marker — at the northwest corner of Hull and Whitaker Streets — stood, formerly, the residence of William Alexander Caruthers, Virginia’s earliest significant novelist. He resided in Savannah for several years before his death in 1846.

Dr. Caruthers, who married Louisa Catherine Gibson of Whitemarsh Island, Chatham County, moved in 1837 to this city where he successfully practiced medicine. He took a prominent part in affairs in Savannah as a realtor; was one of the founders of the Georgia Historical Society and while an Alderman, 1841-1844, was instrumental in giving Savannahians direct election of their Mayors.

As one of the South’s pioneering historical romancers, Caruthers rewrote and first published at Savannah his last and finest novel, “The Knights of the Golden Horse-Shoe” (1841), one of the earliest novels to be published in book form in Georgia. His first novel, “The Kentuckian in New-York” (1834), contains an admiring description of Savannah. Dr. Caruthers died of tuberculosis at Marietta, Ga., in 1846 and is buried there in an unlocated grave in St. James’ churchyard.

Tips for Finding This Marker: On Chippewa Square in Savannah