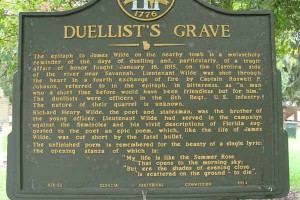 Marker Text: The epitaph to James Wilde on the nearby tomb is a melancholy reminder of the days of duelling and, particularly, of a tragic affair of honor fought January 16, 1815, on the Carolina side of the river near Savannah. Lieutenant Wilde was shot through the heart in a fourth exchange of fire by Captain Roswell P. Johnson, referred to in the epitaph, in bitterness, as “a man who a short time before would have been friendless but for him.” The duellists were officers in the 8th Regt. U.S. Infantry. The nature of their quarrel is unknown.

Richard Henry Wilde, the poet and statesman, was the brother of the young officer. Lieutenant Wilde had served in the campaign against the Seminoles and his vivid description of Florida suggested to the poet an epic poem, which, like the life of James Wilde, was cut short by the fatal bullet.

The unfinished poem is remembered for the beauty of a single lyric, the opening stanza of which is:

“My life is like the Summer Rose,
That opens to the morning sky;
But ere the shades of evening close,
Is scattered on the ground – to die.”

Tips for Finding This Marker: In Colonial Park Cemetery in Savannah.