Explosion At The Confederate Powder Works

Explosion At The Confederate Powder Works 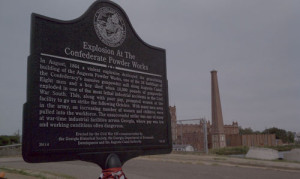 Marker Text: In August, 1864 a violent explosion destroyed the granulating building of the Augusta Powder Works, one of the 28 buildings of the Confederacy’s massive gunpowder mill along Augusta Canal. Eight men and a boy died when 18,000 pounds of gunpowder exploded in one of the most lethal industrial accidents in the Civil War South. This, along with poor pay, prompted women at the facility to go on strike the following October. With many men away in the army, an increasing number of women and children were pulled into the workforce. The unsuccessful strike was one of many at war-time industrial facilities across Georgia, where pay was low and working conditions often dangerous.

Erected for the Civil War 150 commemoration by the Georgia Historical Society, the Georgia Department of Economic Development, and the Augusta Canal Authority.

Tips for Finding This Site: On Eve Street, northeast of Broad Street in Augusta