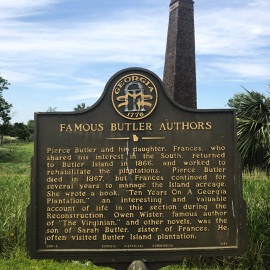 Marker Text: Pierce Butler and his daughter, Frances, who shared his interest in the South, returned to Butler Island in 1866, and worked to rehabilitate the plantations. Pierce Butler died in 1867, but Frances continued for several years to manage the Island acreage. She wrote a book, “Ten Years On A Georgia Plantation,” an interesting and valuable account of life in this section during the Reconstruction. Owen Wister, famous author of “The Virginian,” and other novels, was the son of Sarah Butler, sister of Frances. He often visited Butler Island plantation.