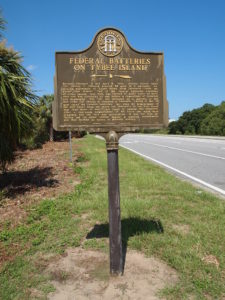 Marker Text: Between February 21 and April 9, 1862, Federal troops under Gen. Quincy A. Gillmore erected 36 guns in 11 batteries, extending eastwardly on Tybee Island from Lazeretto Creek opposite Fort Pulaski. Two of the Federal batteries consisted of rifled cannon. The work was carried on under cover of darkness and was concealed by day behind a camouflage of branches and brushwood. The Fort was defended by a garrison of 385 men under Col. Charles H. Olmstead of Savannah. Twenty of the 48 guns faced the Federal batteries, but when the bombardment of the fort began from the shore the defenders of the Fort found that they were of insufficient range to damage the attackers. After a continuous bombardment of 30 hours the walls were breached and the Fort was surrendered. It was the first effective use of rifled cannon against a masonry fortification and thus marked an epoch in military history.

Tips for Finding This Marker: Northeast of intersection US-80 on Battery Drive on Tybee Island.