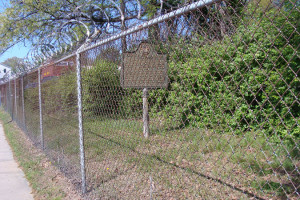 *Marker Text: July 22, 1864. When 15th A.C. troops moved W. from line (at Candler St.) to the vacated Confederate line at the Troup Hurt house (at DeGress Ave.), a signal station was established by Lt. Samuel Edge in a tall pine near this site commanding a view of fortified Atlanta.

Lt. Edge reported the advance of Confederate forces astride the R.R. and when the 15th A.C. line was broken, he abandoned the station — returning to it after the line was restored.

Near this site, in 1885, the battlefield was studied from a tower erected by the artists who created the Cyclorama; this established the viewing point of the big picture.

Tips for Finding This Marker: At the intersection of Dekalb and Moreland Avenues in Atlanta