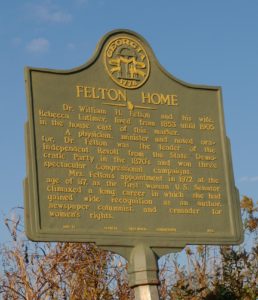 *Marker Text:Dr. William H. Felton and his wife, Rebecca Latimer, lived from 1853 until 1905 in the house east of this marker.

A physician, minister and noted orator, Dr. Felton was the leader of the Independent Revolt from the State Democratic Party in the 1870´s and won three spectacular Congressional campaigns.

Mrs. Felton´s appointment in 1922 at the age of 87, as the first woman U.S. Senator climaxed a long career in which she had gained wide recognition as an author, newspaper columnist, and crusader for women´s rights.

*This marker is missing.

Tips for Finding this Marker: At the intersection of GA 61 and Old Tennessee Road in Cartersville