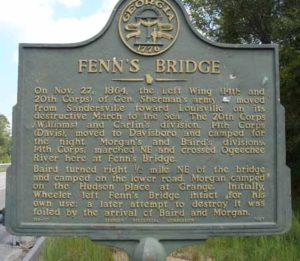 Marker Text: On Nov. 27, 1864, the left wing (14th and 20th Corps) of Gen. Sherman’s army [US] moved from Sandersville toward Louisville on its destructive March to the Sea. The 20th Corps (Williams) and Carlin’s division, 14th Corps (Davis), moved to Davisboro and camped for the night. Morgan’s and Baird’s divisions, 14th Corps, marched E and crossed the Ogeechee River here at Fenn’s Bridge.

Baird turned right 1/2 mile E of the bridge and camped on the lower road. Morgan camped on the Hudson place at Grange. Initially, Wheeler left Fenn’s Bridge intact for his own use; a later attempt to destroy it was foiled by the arrival of Baird and Morgan.

Tips for Finding This Marker: On GA 88, southwest of GA 171 in Louisville