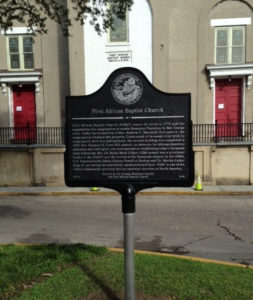 Marker Text: First African Baptist Church (FABC) traces its roots to 1773 and the organization of a congregation at nearby Brampton Plantation by Rev. George Leile. Under the leadership of Rev. Andrew C. Marshall (3rd pastor), the congregation obtained this property. Constructed of Savannah Grey brick by congregants, both free and enslaved, the current building was completed in 1859. Rev. Emanuel K. Love (6th pastor), an advocate for African-American education and civil rights, was instrumental in establishing today’s Savannah State University. Rev. Dr. Ralph Mark Gilbert (13th pastor) was a prominent leader of the NAACP and the revival of the Savannah chapter in the 1940s. U.S. Representative Adam Clayton Powell of Harlem and Dr. Martin Luther King, Jr. are among the noteworthy speakers hosted here. FABC is one of the oldest continuously operating African-American churches in North America.

Tips for Finding This Marker: Located at 23 Montgomery Street in Savannah, Marker is in Franklin Square across the street from the church