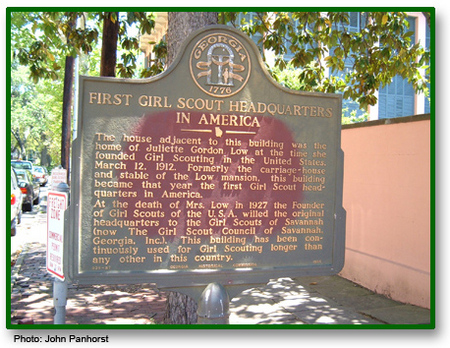 Marker Text: The house adjacent to this building was the home of Juliette Gordon Low at the time she founded Girl Scouting in the United States, March 12, 1912. Formerly the carriage-house and stable of the Low mansion, this building became that year the first Girl Scout headquarters in America.

At the death of Mrs. Low in 1927 the Founder of Girl Scouts of the U.S.A. willed the original headquarters to the Girl Scouts of Savannah (now The Girl Scout Council of Savannah, Georgia, Inc.). This building has been continuously used for Girl Scouting longer than any other in this country.

Tips for Finding This Marker: On Macon Street, east of Drayton Street in Savannah