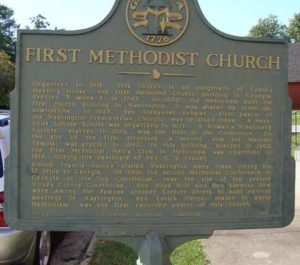 Marker Text: Organized in 1819, this Church is an outgrowth of Grant’s Meeting House, the first Methodist Church building in Georgia, erected 5 miles E, in 1787. In 1820, the Methodists built the first church building in Washington. It was shared by other denominations. In 1823, Rev. Alexander Webster, first pastor of the Washington Presbyterian Church, was ordained there. A Methodist Sunday School was organized in 1871. A Women’s Missionary Society, started in 1878, was the first in the Conference. On the site of the first structure, a second, now the Masonic Temple, was erected in 1882. In this building, erected in 1907, the first Methodist Men’s Club in Methodism was charted in 1919, during the pastorate of Rev. G.S. Frazer.

Bishop Francis Asbury visited Washington many times during his 17 trips to Georgia. He held the Second Methodist Conference in Georgia in the log Courthouse, near the site of the present Wilkes County Courthouse. Rev. Hope Hull and Rev. Lorenzo Dow were among the famous pioneer Circuit Riders to hold revival meetings in Washington. Rev. Lovick Pierce, leader in early Methodism, was the first recorded pastor of this church.

Tips for Finding This Marker: At the intersection of South Liberty and Spring Streets in Washington