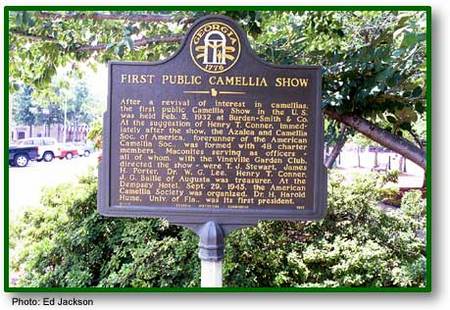 Marker Text: After a revival of interest in camellias, the first public Camellia Show in the U.S. was held Feb. 5, 1932 at Burden-Smith & Co. At the suggestion of Henry T. Conner, immediately after the show, the Azalea and Camellia Soc. of America, forerunner of the American Camellia Soc., was formed with 48 charter members. Maconites serving as officers — all of whom, with the Vineville Garden Club, directed the show — were T.J. Stewart, James H. Porter, Dr. W.G. Lee, Henry T. Conner. J.G. Bailie of Augusta was treasurer. At the Dempsey Hotel, Sept. 29, 1945, the American Camellia Society was organized. Dr. H. Harold Hume, Univ. of Fla., was its first president.

Tips for Finding This Marker: On Third Street, between Cherry and Mulberry Streets in Macon.