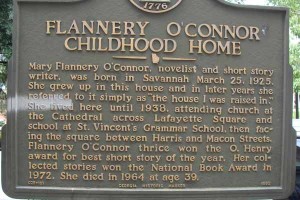 Marker Text: Mary Flannery O’Connor, novelist and short story writer, was born in Savannah March 25, 1925. She grew up in this house and in later years she referred to it simply as “the house I was raised in.” She lived here until 1938, attending church at the Cathedral across Lafayette Square and school at St. Vincent’s Grammar School, then facing the square between Harris and Macon Streets. Flannery O’Connor thrice won the O. Henry award for best short story of the year. Her collected stories won the National Book Award in 1972. She died in 1964 at age 39.

Tips for Finding This Marker: At 207 East Charlton Street in Savannah