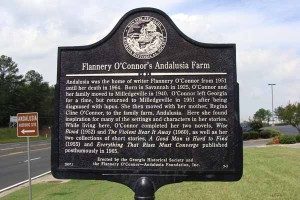 Marker Text: Andalusia was the home of writer Flannery O’Connor from 1951 until her death in 1964. Born in Savannah in 1925, O’Connor and her family moved to Milledgeville in 1940. O’Connor left Georgia for a time, but returned to Milledgeville in 1951 after being diagnosed with lupus. She then moved with her mother, Regina Cline O’Connor, to the family farm, Andalusia. Here she found inspiration for many of the settings and characters in her stories. While living here, O’Connor completed her two novels, Wise Blood (1952) and The Violent Bear It Away (1960), as well as her two collections of short stories, A Good Man is Hard to Find (1955) and Everything That Rises Must Converge published posthumously in 1965.

Erected by the Georgia Historical Society and the Flannery O’Connor Andalusia Foundation, Inc.

Tips for Finding This Marker: At 2628 North Columbia Street in Milledgeville