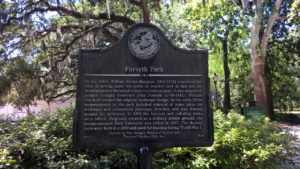 Marker Text: In the 1840s, William Brown Hodgson (1801-1871) conceived the idea of setting aside ten acres of wooded land at this site for development of Savannah’s first recreational park. It was named for former Georgia Governor John Forsyth (1780-1841). William Bischoff created the original landscape design. In the early 1850s improvements to the park included removal of some pines for walkways and ornamental plantings, benches, and iron fencing around the perimeter. In 1854 the fountain and radiating walks were added. Originally created as a military parade ground, the twenty-one-acre Park Extension was added in 1867. The dummy forts were built in c.1909 and used for training during World War I.

Tips for Finding This Marker: At Bull Street, between Gaston and Park Streets in Savannah.
To learn more about this marker topic, visit our Hidden Histories online exhibit.