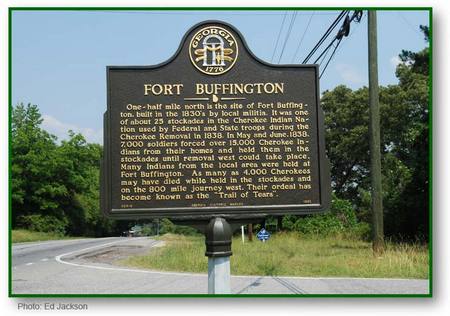 Marker Text*: One-half mile north is the site of Fort Buffington, built in the 1830’s by local militia. It was one of about 25 stockades in the Cherokee Indian Nation used by Federal and State troops during the Cherokee Removal in 1838. In May and June, 1838, 7,000 soldiers forced over 15,000 Cherokee Indians from their homes and held them in the stockades until removal west could take place. Many Indians from the local area were held at Fort Buffington. As many as 4,000 Cherokees may have died while in the stockades and on the 800 mile journey west. Their ordeal has become known as the “Trail of Tears.”

Tips for Finding This Marker: At Buffington Elementary School, on GA 20 in Fairmount.