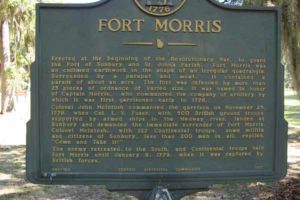 Marker Text: Erected at the beginning of the Revolutionary War, to guard the Port of Sunbury and St. John’s Parish, Fort Morris was an enclosed earthwork in the shape of an irregular quadrangle. Surrounded by a parapet and moat, it contained a parade of about an acre. The fort was defended by more than 25 pieces of ordnance of varied size. It was named in honor of Captain Morris, who commanded the company of artillery by which it was first garrisoned early in 1776.

Colonel John McIntosh commanded the garrison on November 25, 1778, when Col. L.V. Fuser, with 500 British ground troops, supported by armed ships in the Medway River, landed at Sunbury and demanded the immediate surrender of Fort Morris. Colonel McIntosh, with 127 Continental troops, some militia and citizens of Sunbury, less than 200 men in all, replied, “Come and Take It!”

The enemy retreated to the South, and Continental troops held Fort Morris until January 9, 1779, when it was captured by British forces.

Tips for Finding This Marker: At the visitors center on Fort Morris State Historic Site