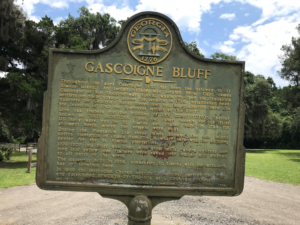 Marker Text: Throughout the ages Gascoigne Bluff has been the gateway to St. Simons Island. An Indian village was located here. Capt. James Gascoigne of HM Sloop-of-war, HAWK, which convoyed the Frederica settlers on their voyage across the Atlantic in 1736, established headquarters for Georgia’s naval forces and had his plantation here. In the invasion of 1742 the Spaniards landed at this bluff.

Live oak timbers for the building of USS CONSTITUTION, better known as “OLD IRONSIDES,” and the other vessels of our first US Navy were cut on St. Simons and loaded here in 1794 for shipment North where the vessels were built.

During the Plantation Era these lands became the sea island cotton plantation of James Hamilton. A wharf here was the shipping center for the St. Simons Plantations.

1874-1902 this Bluff was lined with great mills, where cypress and long leaf yellow pine timbers were sawed into limber and shipped to all parts of the world.

The causeway built in 1924, connecting St. Simons with the mainland, has its terminus here.

In 1949 the Methodist Church acquired the upper part of the Bluff and established EPWORTH-BY-THE-SEA as a Conference Center.

Tips for Finding This Site: At the intersection of Arthur J. Moore Drive and Hamilton Road on St. Simons