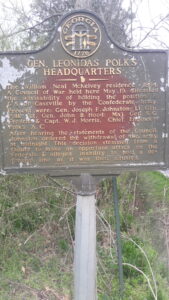 After hearing the statements of the Council, Johnston ordered the withdrawal of the army at midnight. This decision stemmed from a failure to make an opportune attack on the Federals, & alleged inability to hold a defensive line as it was then situated.

Tips for Finding This Marker: On Mac Johnson Road in Cassville.