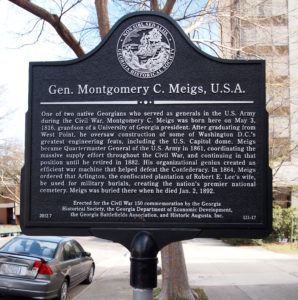 Marker Text: One of two native Georgians who served as generals in the U.S. Army during the Civil War, Montgomery Meigs was born here on May 3, 1816, grandson of University of Georgia president. After graduating from West Point, he oversaw construction of some of Washington D.C.’s greatest architectural feats, including the U.S. Capitol Dome. Meigs became Quartermaster General of the U.S. Army in 1861, coordinating the massive supply effort throughout the Civil War, and continuing in that position until he retired in 1882. His organizational genius created an efficient war machine that helped defeat the Confederacy. In 1864, Meigs ordered that Arlington, the confiscated plantation of Robert E. Lee’s wife, be used for military burials, creating the nation’s premier national cemetery. Meigs was buried there when he died Jan. 2, 1892.

Erected for the Civil War 150 commemoration by the Georgia Historical Society, the Georgia Department of Economic Development, the Georgia Battlefields Association, and Historic Augusta, Inc.