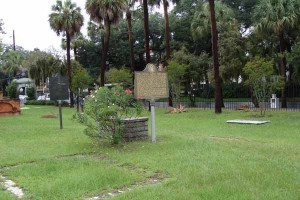 Marker Text: Samuel Elbert, who became brigadier general in the Continental Army and governor of Georgia, migrated to this province from South Carolina as an orphan youth during the Colonial period. He prospered in mercantile pursuits and as an Indian trader; became a member of the Commons House of Assembly from Ebenezer, and was captain of a grenadier company prior to the Revolution.

A staunch patriot, Elbert served on the Council of Safety and in the first Provincial Congress of Georgia in 1775. He was commissioned (1776) lieut.-colonel of the first Continental regiment raised here. Col. Elbert participated in two Florida expeditions; gallantly commanded the Georgia Line at the fall of Savannah (1778); was captured by the British at Briar Creek (1779) and later took part in the Yorktown campaign. He was promoted to brig. general in the Continental Army in 1783. He became Governor of this State, Sheriff of Chatham County and Grand Master of Georgia Masons.

Elbert died Nov. 2, 1788, and was buried at Rae’s Hall Plantation near Savannah. In time, the burial place of the Revolutionary hero was forsaken and forgotten. During the early years of the 20th century the grave was desecrated and exposed when earth was removed from the Indian mound on which he and his wife, Elizabeth Rae Elbert, were buried. Following identification by acceptable evidence, the remains of the Revolutionary hero were rescued in 1916 by a committee of the Sons of the Revolution, headed by R.J. Travis. The bones of the patriot were reinterred here in 1924 with full military honors.

Tips for Finding This Marker: In Colonial Park Cemetery in Savannah