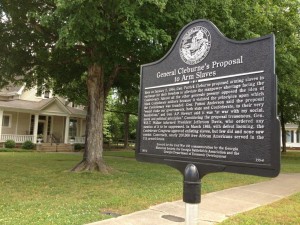 Marker Text: Here on January 2, 1864, Gen. Patrick Cleburne proposed arming slaves in exchange for their freedom to alleviate the manpower shortage facing the Confederacy. Almost all the other generals present opposed the idea of black Confederate soldiers because it violated the principles upon which the Confederacy was founded. Gen. Patton Anderson said the proposal “would shake our governments, both state and Confederate, to their very foundations,” and Gen. A.P. Stewart said it was “at war with my social, moral and political principles.” Considering the proposal treasonous, Gen. W.H.T. Walker informed President Jefferson Davis, who ordered any mention of it to be suppressed. In March 1865, with defeat looming, the Confederate Congress approved enlisting slaves, but few did and none saw combat. Conversely, nearly 200,000 free African Americans served in the U.S. armed forces.

Erected for the Civil War 150 commemoration by the Georgia Historical Society, the Georgia Battlefields Association and the Georgia Department of Economic Development in 2011.

Tips for Finding This Marker: At 314 North Selvidge Street in Dalton