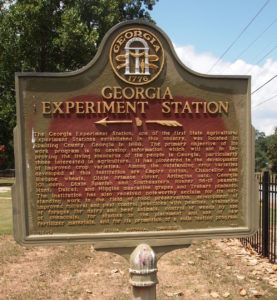 Marker Text:  The Georgia Experiment Station, one of the first State Agricultural Experiment Stations established in this country, was located in Spalding County, Georgia in 1888. The primary objective of its work program is to develop information which will aid in improving the living standards of the people in Georgia, particularly those interested in agriculture. It has pioneered in the development of improved crop varieties. Among the outstanding crop varieties developed at this institution are Empire cotton, Chancellor and Bledsoe wheats, Dixie crimson clover, Arlington oats, Georgia 101 corn, Dixie Spanish and Southeastern Runner 56-15 peanuts, Hunt, Dulcet, and Higgins muscadine grapes and Truhart pimiento. The institution has also received noteworthy acclaim for its outstanding work in the field of food preservation, development of improved cultural and pest control practices with peaches, evaluation of forages for dairy and beef animals, control of weeds by use of chemicals, for studies in the placement and use of new fertilizer materials, and for its promotion of a soils testing program.