Georgia School for the Deaf

Georgia School for the Deaf 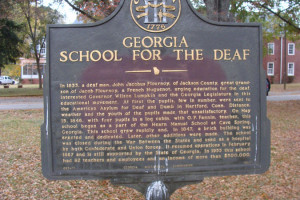 Marker Text: In 1833, a deaf man, John Jacobus Flournoy, of Jackson County, great grandson of Jacob Flournoy, a French Huguenot, urging education for the deaf, interested Governor Wilson Lumpkin and the Georgia Legislature in the educational movement. At first the pupils, few in number, were sent to the American Asylum for Deaf and Dumb in Hartford, Conn. Distance, weather and the youth of the pupils made that unsatisfactory. On May 15, 1846, with four pupils in a log cabin, with O.P. Fannin, teacher, this school began as a part of the Hearn Manual School at Cave Spring, Georgia. This school grew rapidly and, in 1847, a brick building was erected and dedicated. Later, other additions were made. The school was closed during the War Between the States and used as a hospital by both Confederate and Union forces. It resumed operations in February 1867 and is still supported by the State of Georgia. In 1955 this school had 82 teachers and employees and an income of more than $500,000.

Tips for Finding This Marker: On School Circle Road in Cave Spring