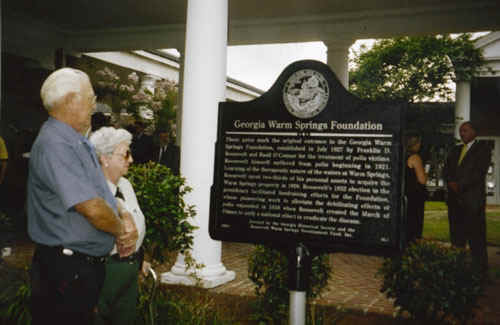 Marker Text: These gates mark the original entrance to the Georgia Warm Springs Foundation, established in July 1927 by Franklin D. Roosevelt and Basil O’Connor for the treatment of polio victims. Roosevelt himself suffered from polio beginning in 1921. Learning of the therapeutic nature of the waters at Warm Springs, Roosevelt spent two-thirds of his personal assets to acquire the Warm Springs property in 1926. Roosevelt’s 1932 election to the presidency facilitated fundraising efforts for the Foundation, whose pioneering work to alleviate the debilitating effects of polio expanded in 1938 when Roosevelt created the March of Dimes to unify a national effort to eradicate the disease.

Tips for Finding This Marker: At 6315 Roosevelt Highway in Warm Springs