Georgians in the Union Army

Georgians in the Union Army 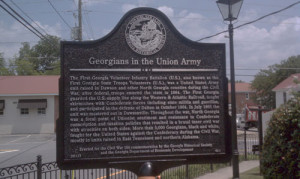 Marker Text: The First Georgia Volunteer Infantry Battalion (U.S.), also known as the First Georgia State Troops Volunteers (U.S.), was a United States Army unit raised in Dawson and other North Georgia counties during the Civil War, after federal troops entered the state in 1864. The First Georgia guarded the U.S. supply line along the Western & Atlantic Railroad, fought skirmishes with Confederate forces including state militia and guerrillas, and participated in the unsuccessful Federal defense of Dalton in October 1864. Throughout the war, North Georgia was a focal point of Unionist sentiment and resistance to Confederate conscription and taxation policies that resulted in a brutal inner civil war with atrocities on both sides. More than 5,000 Georgians, black and white, fought for the United States against the Confederacy during the Civil War, mostly in units raised in East Tennessee and northern Alabama.

Tips for Finding This Marker: At the county courthouse in Dawsonville