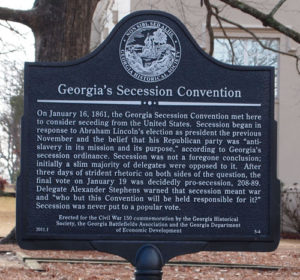 Marker Text: On January 16, 1861, the Georgia Secession Convention met here to consider seceding from the United States. Secession began in response to Abraham Lincoln’s election as president the previous November and the belief that his Republican party was “anti-slavery in its mission and its purpose,” according to Georgia’s secession ordinance. Secession was not a foregone conclusion; initially a slim majority of delegates were opposed to it. After three days of strident rhetoric on both sides of the question, the final vote on January 19 was decidedly pro-secession, 208-89. Delegate Alexander Stephens warned that secession meant war and “who but this Convention will be held responsible for it?” Secession was never put to a popular vote.

Erected for the Civil War 150 commemoration by the Georgia Historical Society, the Georgia Battlefields Association, and the Georgia Department of Economic Development.

Tips for Finding This Marker: At the intersection of East Greene and South Jefferson Streets in Milledgeville